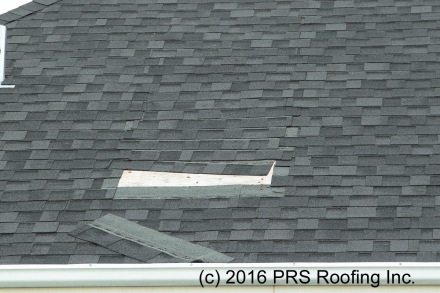 Most people assume that the visible external roof covering is the “real” roof, which functions to keep the water and weather out of the roof system.  This is true for flat or low-slope roofing materials, but not true for steep-slope materials (which is anything over a 3:12 roof slope).  Steep-slope materials are designed to shed water.  That means that water is supposed to run off the surface, and if properly layered, the water stays on the outside.  However, if wind or a physical obstruction interrupts the water flow, then it will go under the roofing material.  This is true for all steep-slope roofing material, whether it is made of asphalt shingles, or metal shingles, or metal panels, or cedar shakes, or slate.

It’s the unappreciated and unloved underlayment layer that’s below the top layer that has the job of actually keeping the water out.  That layer is the “true” waterproof roof, which is composed of layering of flashings, membrane, underlayment, and sealants.  It’s also the layer which is easiest to skimp on when the contractor is being pressed to come up with a low price.   If you can’t see it, and you don’t even know that it needs to be there, then why would you want to pay for it?

How does the saying go?  Ah yes.  Penny-wise, pound foolish.

END_OF_DOCUMENT_TOKEN_TO_BE_REPLACED

After seeing the system presentation last year, and having had the endorsement from Jon Eakes, I considered adding the Tri-Energy system to my heating system, partly to get a better level of comfort, but primarily to reduce the overall cost of heating.

The system has been installed by Martin and his people, and we’re obtaining some experience with the operation.  I’ve chosen to have the Ecobee 3 thermostat (wifi-enabled) in addition to the electronic relays (some of the upgrades to the basic system).

The basic system is a high-efficiency oil furnace as the primary system (distributing the heat through a central air ductwork), with the heat pump delivering the majority of the heating and cooling when above the critical temperature (of -12C). The Tri-Energy system added a third element (the auxiliary heating coils), along with the Tri-Energy controller and the EcoBee 3 thermostat.  The heating system also has a built-in humidifier.

A recent innovation that Martin built into his system features a “pulse” feature on the oil heat.  The usual operation of the oil furnace is full-on until the target temperature is reached.  The new feature that Martin built in, pulses the oil furnace, so that it runs about 2 minutes on the burner, and then three minutes on the fan only.  Since oil usually generates a lot of heat, this heat then builds up in the ductwork, and by the time the hot air is moving into the living space, there is a lot of heat stored in the duct system.  With the new pulse feature, the running of the fan without the oil burner allows the air to run through the heated ducts, transferring some of the heat in the duct system, to the room air.

Compared to newer homes, we are still using more energy, and that can be traced to the lack of air sealing and insulation, something that we will have to improve over the next few years.  However, we have the benefit of much more even heat, and hopefully, lower operating costs over the years.

That is a curious result that happens.  Someone finally invests some serious money in upgrading their kitchen (or bathroom), installing beautiful cabinetry, gorgeous ceiling lights, and finally get the attractive and bright kitchen (or comfortable bathroom) that they always wanted.  The following winter, an ice dam forms.  The following year, the ice dam gets worse and the ceiling starts to leak after every thaw.  What’s going on?

END_OF_DOCUMENT_TOKEN_TO_BE_REPLACED

Roof stripping, that is.  This is the process of getting rid of the old roof covering material, down to the deck.  In the process, if done correctly, you’ll learn a lot of things about what worked on your roof and what didn’t.  As all things that are good for you, there are costs and inconveniences involved, aspects which are exploited by those contractors who don’t have your best interests at heart.

What are some of the typical reasons you’re given why leaving your old roof on and going over is/are acceptable?  They include:

So many great reasons why you should just leave the old roof on, and go over!  And yet, pretty much all of these are false, based on the homeowner’s lack of knowledge of how the roof system is supposed to work, and compounded by the contractor’s desire to get the job done as fast as possible, get paid, and move on.  If you are presented with the suggestion that leaving your old roof on is an acceptable strategy, there are a number of things you should be aware of before you agree to this.

END_OF_DOCUMENT_TOKEN_TO_BE_REPLACED

Various roof failures, including asphalt shingle blow-off, and premature curling and cracking, has led homeowners to look for more reliable and durable solutions.  As such, people often start asking about metal roofing.

Metal roofing continues to be more and more popular, despite its initial cost, because people are getting tired of having roofs that fail much before their warranties expire.  The metal product offerings come in a dizzying variety of materials, appearances, textures, colours, and performance.  How does one wade through all the sales claims and marketing hype to decide which options are truly the best for you?  It helps to remember that there is no product invented by humans that is truly perfect in every circumstance.  So the exercise is to find the product whose weaknesses are minimized in your particular circumstances, and whose strong points are fully delivered.  It should not be a surprise that proper preparation and installation play a very big role in the final quality of the result.  So let’s examine a selection of products and discuss how their weak (and strong) points should be considered in your selection process.

END_OF_DOCUMENT_TOKEN_TO_BE_REPLACED

Closed cell-spray foam used as insulation, has been on the market since about 1979, and has gone through a number of evolutionary steps.  The product is a solid plastic, formed by the chemical reaction of two primary components:  an “A” side which is isocyanate, and a “B” side which is usually a mixture of oils, stabilizers, fire retardants, blowing agents, and colouring agents.  The reaction is exothermic (ie, generates a lot of heat), and the materials form a solid within seconds. The blowing agents are the compounds which produce the low-conductivity gas that forms the bubbles in the foam, and thereby form the primary insulation.

When applied to a minimum thickness of 50mm (slightly under 2 inches), the material acts as  insulation, vapour barrier, and an air barrier.  Newly-installed foam has R-values of R-6 to R-7.5 per inch, but this diminishes to about R-5 per inch over time as the insulating gas dissipates.  Compared to other insulation products like fiberglass bat or mineral wool bats, the product has more insulating value per inch, and resists the loss of heating value that sometimes occurs with loose insulation due to air convection with extreme temperature differences.

The ability to prevent air and vapor movement is generally a good thing, except in situations where moisture can enter a wood structure, and then cannot get out.  Therefore the short answer to the question in the header is “spray foam is good when PROPERLY installed, and BAD when installed in inappropriate places or in an incorrect manner.  There are also issues of the impact on the environment, and potential impact on the health of the people living in the homes where the product is used.  The rest of the post touches on some aspects that inform whether the installation is good or not.

END_OF_DOCUMENT_TOKEN_TO_BE_REPLACED

February and March are usually ice-dam season in the Montreal area.  I’ve written before about ice dams What’s an “Ice Dam”?  and Ice Dams – Cures, fixes and band-aids.  and it’s time to look at what you need to do to make the problem go away.

The first thing to look at is the source of the problem, which is excessive heat transfer to the roof, the consequent melting of snow, and the freezing of the melt at the eaves and valleys.

This post will review the various components that contribute to the formation of ice dams, and will suggest a number of ways these can be corrected.

END_OF_DOCUMENT_TOKEN_TO_BE_REPLACED

Owner of PRS Roofing Inc., Permanent Roofing Systems, and PRS Consulting. Occasional inventor. Preacher and teacher, with the favorite topic being how to do it right the first time. Technical consultant to many DIY roofing installers.

All travel is local

My journey to a more sustainable life

What you need to know about roofing

The Art and Craft of Blogging

The latest news on WordPress.com and the WordPress community.