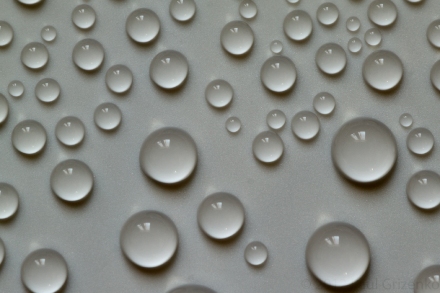 Condensation plays the same role in “modern” roofing practice as “bad spirits” did in medieval times.  If something went wrong, you blamed the bad spirits.  Nowadays, if a roofing system is not working, it’s due to “condensation”.  So let’s get into it and understand what condensation is, when can it appear in a roof system, and what corrective action you can and should take if condensation is really the cause of an apparent leakage.

the 100% humidity mark (or dew point).  If air at 100% humidity at a certain temperature is warmed, then the air is no longer fully saturated with moisture as it has the capacity to hold more vapour.  The converse is also true, that air containing moisture to the 70% mark, will become saturated (100% humidity) as the temperature falls – see example above  Condensation happens when the air cools to the dew point, and the moisture in the air reaches saturation point, so the excess moisture then condenses.  In the specific example highlighted, air at 2oC and 70% humidity will be saturated if the temperature falls to 14C.  Cooler surfaces reach the dew point earlier, so it is often said that the cooler surface “attracts” condensation.  Materials that lose energy faster (either by conduction, or radiation) will tend to cool faster, so metal will usually cool faster than wood or plastic.

In cold climates, the moisture content of external air is usually quite low.  However, it is common for interior air to have moisture content in excess of 40%.  If this warm, moist air escapes into a cold area, then the air will cool and soon reach the dew point, at which point moisture will condense on the nearest cold surface.  The common ways warm air gets into the attic include:

Occasionally, the moisture source can be a leak which entered the old shingles (if the roof was not stripped to the deck), and daytime heat can then drive the moisture into the attic.  Once the attic cools at night, the moisture condenses out as a condensate.

Condensation is most easily apparent in winter, when it can be seen as “frost” on the underside of the decking and as little stalactites on the nails, as can be seen in the following image: 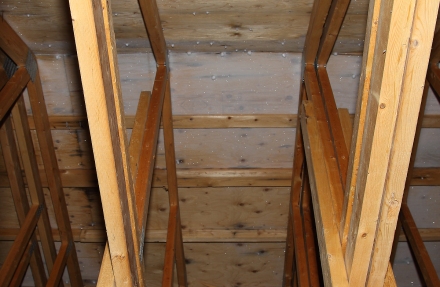 Obviously, if this situation is allowed to persist, the moisture on the decking will support the growth of mold and mildew.  If the wood get wet enough to rot, this can also attract carpenter ants who live in and on rotting wood. 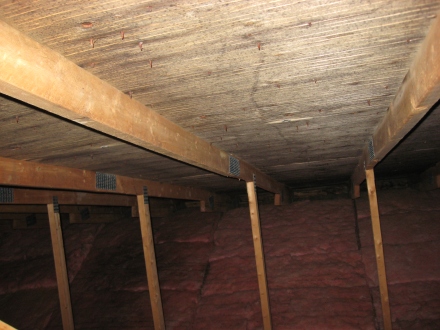 The above image shows an attic in which condensation has supported mold.  All the nails are rusty and the wood is starting to delaminate.

Condensation can also appear on the underside of metal roofing, even in temperatures above freezing.  We see examples of this type of condensation many mornings with the morning dew on the grass.  The same effect is happening under the metal as well.  Below is an image of a roof we investigated for suspected leaking: 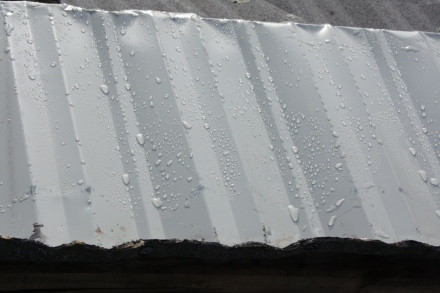 This is the underside of a Decra steel panel, carefully turned over to minimize the loss of adhered water.  The image was taken on a fall morning, with the temperatures being cool but not freezing.  The same effect can be seen under any metal roof where the air underneath the panels or shingles is higher in humidity than the “outside” air.

In the above case, the eventual source of the moisture contributing to this condensation was found to be interior air leaking through pot-light installations into an inadequately-ventilated attic space.

So, how do you avoid condensation in your attic?

For “normal” amounts of moisture in the attic, the tool used to dissipate it is ventilation.

Ventilation works because warmer air is less dense than colder air and rises.  In an attic, the warmed air rises to the top of the structure (usually the ridge), and is allowed to escape via the outlet vents (ridge vents, and other vents of various profiles).

Ideally, the ventilation is:

Let’s tackle each of these in turn.

CONTINUOUS ventilation is desired because it is always working to dry out the cold spaces.

PASSIVE ventilation is desired because it uses the natural property of warmed air to be more buoyant than cooler air.  Active ventilation (for example, using a power fan to exhaust the air) is usually less desirable because it can, if the air and vapour barriers are not effective, pull in moist air from the house interior into the cold spaces, and aggravate the problem.  Power fans also can over time become noisy, and they do require some upkeep, which means occasional trips into the attic to inspect them.

LAMINAR means the air flows as a sheet, instead of chaotic or turbulent, which is usually caused by obstructions in the airflow.

“Evacuates the entire area of the attic” is important because otherwise there may be pockets of still air where the ventilation doesn’t reach, and these become prime places for condensation to form and cause problems.

“Sufficient volume of air moving through to do this job”.  Try breathing through a straw and see how long you can do this.  Most of us can’t do it for any length of time and start having some discomfort or respiratory distress.  To get adequate oxygen, we need an adequate airflow.  Your roof is no different.  In residential construction, there are guidelines in place that set the minimum standards.  Since air flow measurements in homes are difficult to do, the requirement is stated in the form of the ratio of openings relative to the surface area of the attic.  This minimum, for most jurisdictions in Canada is set at 1:300, meaning that there has to be 1 square unit of ventilation openings for every 300 square units of attic space for roof slopes of 3:12 and up.  [NOTE:  this ratio is applicable for unobstructed airflow.  If the vents are obstructed, whether by spiderwebs or screening, it is better to use a more generous ratio, like 1:150 or even 1:75)

This is split 50-50 between entry and exit (because for every cubic ft. of air leaving, you need to replace it with another cubic ft. of air), although variations up to 40-60 or 60-40 are also considered acceptable.  So in the above example, there should be 2 sq.ft. of entry ventilation and 2 sq. ft. of  outlet ventilation.

The normal entry of air is through ventilated soffits, located at the back of the eaves, generally between the eaves and the house.  The vented soffits are not all equal with respect to the amount of air they let in.  The number that tells us the amount of ventilation of the soffit is NFA which stands for Net Free Area.  These are usually stated in terms of square inches (per some measure of area).  So, a common aluminum vented soffit is rated at 4.02 sq.in. per lineal foot (for a 16″ wide panel).  Converting that to square feet, that means that each square foot of panel provides for 3.02 sq. inches of air, or 0.021 sq.ft. of air.  If you need 2 sq.ft. of ventilation at the intake, that means you need 95 sq. ft. (2/.021) of unobstructed vented soffit to get the required intake of air. 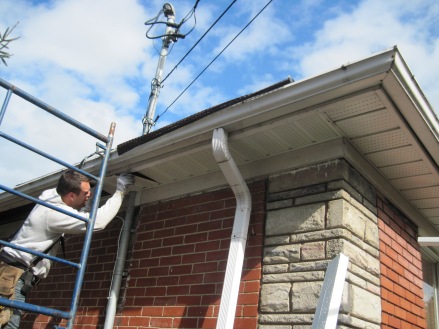 Let’s say the example house above was 30 x 40 ft. (giving us the 1,200 sq.ft. attic).  Assume that the shape is the simplest shape, of two rectangular slopes connected at the ridge. There is therefore 40 ft. of front eave, and 40 ft. of rear eave.  If the soffits are 1 ft. wide, then you will have an effective soffit area of 80 sq.ft.  But in the example above, we need 95 sq. feet.  Since rebuilding the soffits to make them wider is not a simple exercise, we should look at changing the vented soffit to one that is able to give us desired amount of ventilation.  Doing the calculations in reverse, we determine that we need 0.025 sq.ft. NFA, or 3.6 sq. in. per 1 sq. ft. of soffit, or 4.8 sq. in. of ventilation per 1 linear foot of 16″ soffit.

Therefore to get the minimum amount of intake ventilation, we need to use a soffit which has a NFA rating of 4.8 (sq.in. per 1 lineal foot of 16″ panel) or better.  Remember, the minimum ventilation ratios expect to have unobstructed air-flow.

At the outlet, we have a variety of choices.  We can use a ridge vent, or a low-profile model, or a stack vent like a Maximum or Venmar or Optimum.  The latter usually have an opening of about 1 sq. ft., but claim that their cover design ends up pulling out more air because of a suction effect.  I personally prefer to be more conservative, and assume no help from wind.  Therefore I would specify two Maximum (or the alternative brands) to provide me with the required amount of air exhaust.

So, are we done yet?   Um, not quite.  The air from the soffit cavity has to get into the attic.  That is usually done through a channel formed between the rafters, the decking and the insulation, and the code specifies that the minimum space is 25mm or 1 inch (for low-slope roofs of 2:12 or less, the air channel needs to be 75mm or 3 inches).  This means that all your soffits need to connect to the attic via a channel of 1″ or better.  Many homeowners stuff the insulation right up to the decking, thinking that they are improving the situation, and ending up with condensation and ice-damming issues.  That’s because they cut off the airflow channel and effectively stopped the ventilation.  To ensure that they are not blocking the airflow, they should use channel liners (known as styrovents, and made from a variety of light, extruded plastic), which generally assure the minimum channel height.  An example of this is shown in the following image: 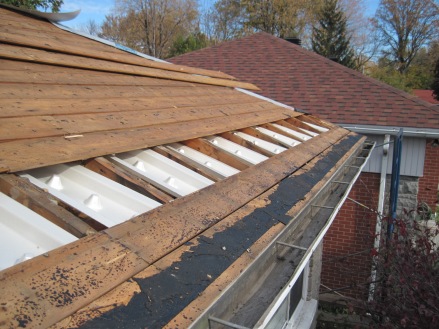 If the attic is not sufficiently well vented from the underside of the deck, an alternative approach can be to build a second, vented deck over the existing deck.  In the image below, the house had no space under the existing decking to create a proper vented space, and the house suffered from extensive ice damming.  To improve the ventilation, the only option was to build a second deck. 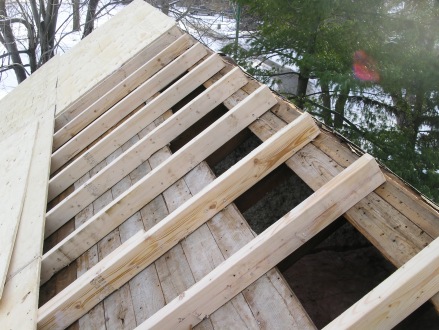 While this addition did not remedy the issue of insufficient insulation, it did diminish the possibility of trapped condensation causing damage.  In situations where the air channel will be blocked by a valley or hip, it may be necessary to build a cross-batten system, consisting of both horizontal and vertical elements, as shown in the example below: 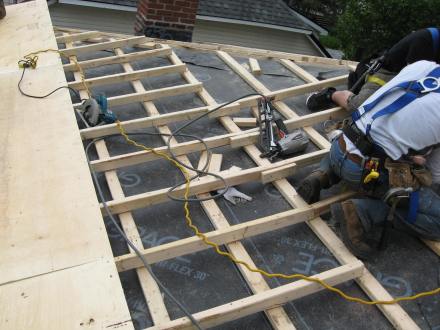 This post did not discuss in detail other issues that can affect the prevention of condensation in a building structure, including the role of breathable membranes, the various ways ventilation can fail, ventilation short-circuits, the other ways moisture can get into roofing system, the role of the house surrounding and positioning, how air ducts in the attic can create serious condensation issues, and the various ways poor installation or design technique can exacerbate the situation.  We have also not discussed water entry into walls (via windows, doors, siding or other cladding), and how that can show up as condensation in the roof.

Owner of PRS Roofing Inc., Permanent Roofing Systems, and PRS Consulting. Occasional inventor. Preacher and teacher, with the favorite topic being how to do it right the first time. Technical consultant to many DIY roofing installers.

All travel is local

My journey to a more sustainable life

What you need to know about roofing

The Art and Craft of Blogging

The latest news on WordPress.com and the WordPress community.